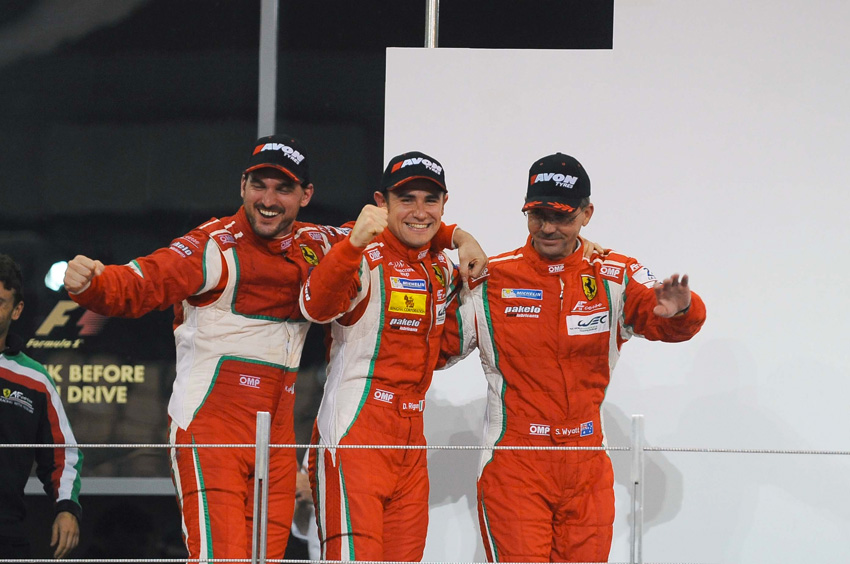 WEC Rookie of the Year, Davide Rigon and fellow Italian Michele Rugolo, along with Australia’s Steve Wyatt took an amazing win in today’s Gulf 12 Hours. The victory, at the wheel of the AF Corse number 3 Ferrari 458 Italia came a week to the day after the Ferrari Finali Mondiali event was held on the same Yas Marina circuit. Second was the Abu Dhabi Racing Black Falcon team Mercedes SLS AMG, with third going to the McLaren 650s entered by McLaren GP. For the second consecutive year, the Italian team run by Amato Ferrari made it to the top step of the podium, a great achievement in this important race, which brings the 2014 endurance racing calendar to a close.

Davide Rigon “It was a fantastic 12 Hours and we dominated the race from start to finish. I am very pleased with the result and how we managed this marathon along with my team-mates Michele Rugolo and Steve Wyatt. I want to thank Ferrari, AF Corse and all the guys in the team who did a great job here in Abu Dhabi.”

It was also a good day for the two-times MotoGP world champion Jorge Lorenzo, who at the wheel of a Ferrari entered by Kessel Racing, took the win in the Gentlemen class, beating the Ferrari 458 GT3 number 89, entered by Villorba Corse, driven by Switzerland’s Didier Cuche, a winner of 21 Alpine skiing world cup races and 6 crystal cups, as well as one World title and a silver medal in the 1998 Winter Olympics at Nagano in Super GT and fellow countryman Christophe Hurni and France’s Cedric Mezard.